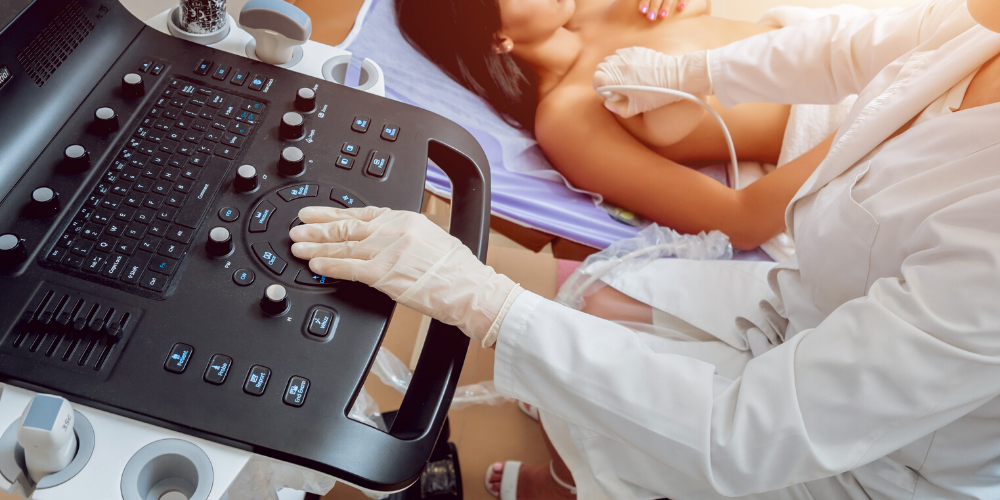 Did you know that mammography alone cannot detect every type of cancer?

In the fight against breast cancer, it is critical to use every screening tool that increases rates of early detection. Most women are used to scheduling their annual mammogram but forego adding a breast ultrasound to their list of routine exams.

You see, women are so conditioned that mammography is the only tool used for breast cancer detection and this is simply not the case. There is another powerful screening tool you can add to your healthcare regimen called a breast ultrasound. Continue reading to discover the benefits of receiving an annual Breast Ultrasound Screening in addition to a mammogram.

Breast ultrasound has been shown to increase early detection rates of breast cancer from approximately 48% to 97% in women with dense breasts. Dense breasts contain more fibrous and glandular tissue than fatty tissue which makes it more difficult for a radiologist to decipher cancer cells. These cells have something in common with dense breast tissue: they both appear white on a mammogram screening. Dense tissue appears white, while cancerous tumors also appear white, making it nearly impossible to "see" the tumor. It's like trying to find a snowball in a snowstorm.

A breast ultrasound is also a trusted screening tool because it can tell the difference between fluid-filled cysts (which usually do not turn out to be cancerous) and a solid mass (which will require more testing to determine if it is cancerous or not).

Ultrasound works by sending high-frequency sound waves to see inside a woman’s breast. These waves are then transformed into images that a radiographer reads, all done without the risk of radiation. Because a breast ultrasound is free of radiation, it is safe to undergo during pregnancy and while nursing. It is also safe for younger women who are under age 25.

A mammogram, on the other hand, exposes women to low doses of radiation but does so every year. We are exposed to radiation in our everyday lives, from natural and man-made sources. When receiving a mammogram, a woman is exposed to about two months of typical, daily radiation in just a few minutes.

Node-negative invasive cancer is cancer that has not infiltrated the lymph nodes but has grown past the initial tumor. Having a positive lymph-node presence under your arm suggests that breast cancer has already begun spreading. The more lymph nodes that contain cancer, the more life-threatening the cancer can be.

Ultrasound has a higher detection rate for node-negative invasive cancer than mammography.

Many women dread getting their annual mammogram because of the painful compression that comes with it. This compression is definitely uncomfortable and also painful. Unfortunately, compression is part of how a mammogram is read and must be done: compressing the breasts spreads out dense breast tissue so radiologists can better see the tissue to detect any abnormalities.

A breast ultrasound screening uses a wand with warm gel to glide over your skin. You can enjoy a painless and procedure that is free of compression.

The high-frequency waves used in ultrasound allow sonographers to get a closer look at abnormal structures and tissue inside the breast. It can get an eagle eye’s view into bodily structures such as ducts, lobes, muscle layers, cysts, abscesses, fibroadenomas and breast masses. A breast ultrasound is often used after a doctor observed something abnormal on a mammogram. If a mammogram detects what appears to be cancerous cells or a lump, an ultrasound can be used to determine if they are benign or not. It can also accurately pinpoint the location of the abnormality.

Do more for your breast health. Add powerful breast Ultrasound Screening to your annual healthcare routine. For more information on HerScan and to request an appointment, please click here.