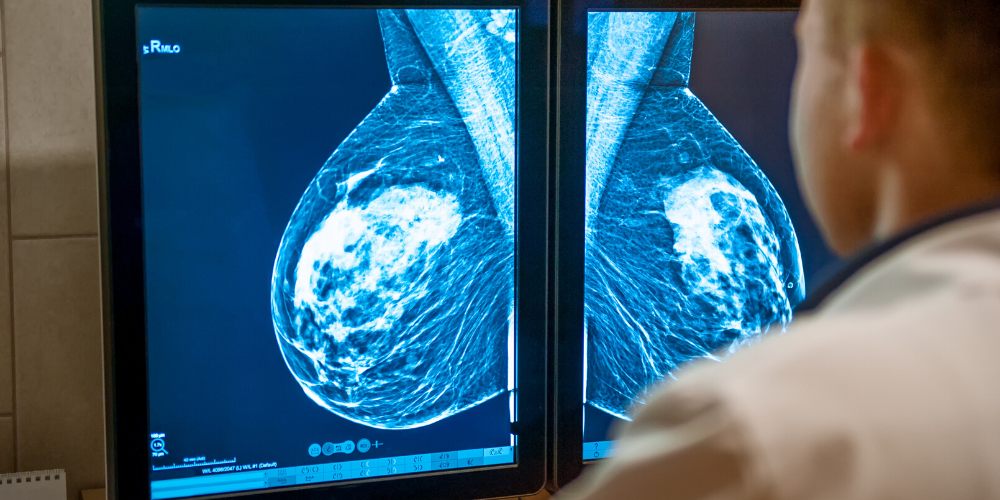 This is why we advocate that you do everything in your power to protect your health; this means receiving an annual Breast Ultrasound Screening in addition to your routine mammogram.

As women, we have been conditioned to believe that mammography is the only way to protect yourself in the fight against cancer, and this is simply not true. There are other powerful tools, such as breast ultrasound, that can increase early detection rates and offer a safer way to screen for cancer, without radiation or compression.

Continue reading to learn the difference between a Breast Mammogram vs. Breast Ultrasound screening.

A mammogram uses x-ray imaging to screen the breast for early signs of cancer. X-rays are a form of radiation that can pass through the human body so the tissue can be examined. Soft tissues, such as muscle, organs and fat, allow the x-ray to pass through them, leaving behind white imagery where dense objects, such as bone and tissue, can be viewed. As you may know, mammograms can often be uncomfortable, as they must compress the breast in order to spread out the tissue so that the x-ray imaging can be accurately captured. The total exam time is approximately thirty minutes.

Breast ultrasound screening (or sonography) uses sound ways to create images of internal breast structures. A small, handheld probe that uses high-frequency sound waves glides over the breast and axilla (armpit) area and collects the emitted sounds. From there, a computer generates ultrasound imagery, which shows the structure and movement of the body’s internal organs. Like a breast mammogram, a radiologist interprets the results after your breast ultrasound screening.

Ultrasound is painless, noninvasive and does not use radiation. In fact, it is a safe screening tool for expectant mothers or mothers who are nursing. This procedure requires little to no preparation and takes approximately fifteen minutes to complete.

Mammography vs. Ultrasound for Breast Healthcare

One of the major differences between a mammogram and breast ultrasound screening is how they are used to detect breast tissue abnormalities. A mammogram is an effective breast screening tool and can detect breast cancers without any visible symptoms, at times even presenting cancers that would take years to manifest into a lump or abnormality in the breast. A breast ultrasound, on the other hand, is excellent for diagnostic uses; for example, it can see the difference between benign fluid-filled cysts versus a solid mass.

In addition, ultrasound is capable of detecting cancers that cannot be found by mammography and physical exams alone. On a mammogram, some breast lesions and abnormalities may not be visible, or be hard to interpret. Both mammography and ultrasounds are more powerful when used together, not in place of one another.

In fact, a study by The American Journal of Roentgenology found that the sensitivity of a mammogram drops from 85% in women with dense breasts to 48%-64%, making it a less effective tool for cancer detection.

Unlike mammograms that use compression to see breast tissue, breast ultrasounds are also painless and use no compression or radiation, making it an easy procedure to add to your annual healthcare routine.

Early detection is everything in the fight against cancer. We encourage women to stay informed and take charge of their healthcare by adding a powerful Breast Ultrasound to their breast healthcare regimen. To schedule an appointment at your convenience, please click here.