Hair Dye and Breast Cancer Risk: What are the Facts? 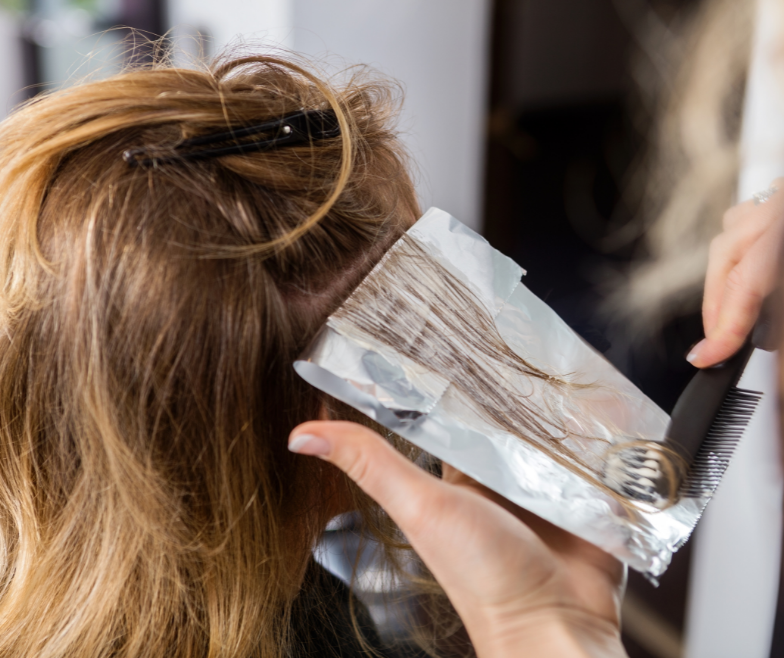 You may have seen the headlines in the news or online with the social media trend #DitchtheDye, but what are the facts when it comes to the connection between breast cancer and hair dye?

According to L'Oreal company research, approximately 35% of U.S. women dyed their hair a decade ago. Recently, this number has skyrocketed with approximately half of women, and a smaller percentage of U.S. men, coloring their hair. With such a large segment of the population, knowing if the hair coloring process poses a risk for breast cancer is critical.

Here’s what we know about hair dye and breast cancer risk.

What is in Hair Dye?

Most hair dyes contain more than 5,000 chemicals, which include some harmful carcinogens (an agent with the capacity to cause cancer in humans). Permanent hair dyes usually contain a mix of ammonia to disrupt layers of the hair’s proteins so the hair color can enter the hair follicle. Hydrogen peroxide is added to help bleach the hair and allow a hair color agent called p-phenylenediamine to bind in the hair, resulting in a permanent hair color change. The agent P-phenylenediamine is a cause for health concern as it has been linked to birth defects, skin irritation, liver and blood toxicity, and allergic reaction. This ingredient is even restricted for use in the European Union.

Most hair dyes also contain aromatic amines which have been shown to cause cancer in lab studies. Aromatic amines can be found in more places than you think as they are the byproduct of the manufacturing process in things like plastics and chemicals, such as hair dye. If you are someone who frequently dyes their hair, there is a strong possibility that you have been exposed to aromatic amines.

When dying your hair, your scalps absorbs a small amount of these chemicals. While you’re at the hair salon and after your hair is dyed, you also have a risk of exposure of breathing the chemicals in.

Does the FDA Regulate Hair Dye?

While hair dye in the U.S. is regulated by the Food and Drug Administration, each ingredient found in the formula is not approved before it hits the market. The manufacturers are responsible for the safety of their products. The FDA is limited in what they can oversee; if there is an introduction of a new ingredient, they must approve it. However, under the Federal Food, Drug, and Cosmetic Act and the Fair Packaging and Labeling Act, the FDA can only step in for regulation concerns if there is “reliable information” that a product is dangerous. Needless to say, the water gets murky.

What is the Connection Between Hair Dye and Breast Cancer Risk?

The studies on the hair dye and breast cancer link are quite mixed. The most popularly referenced study when it comes to their connection is the Sister Study in 2019. This study from the National Institute of Health (NIH) revealed that women who used hair dye were 9% more likely to develop breast cancer than women who avoided hair dye altogether. This study examined the effects of hair dye on 46,709 U.S. women who did not have cancer when they enrolled in the study but who had a sister that had been previously diagnosed with breast cancer. Most notably, the study concluded that there is a greater risk for African American women who dye their hair. African Americans who died their hair every five to eight weeks have a 60% increased risk of developing breast cancer compared to an 8% increased risk in white women.

While the studies undergone have proved that there is an association between hair dye and breast cancer, they did not prove that the process of hair dying causes cancer. Every day, we have the potential to be exposed to things that may contribute to the development of breast cancer, but it is unlikely that one single factor explains a woman’s risk for getting it. It is recommended to try and limit these exposures and live a healthy lifestyle as this can help reduce your risk.

​​As a woman, being proactive against breast cancer is one of the best things you can do for your health. Here are the steps to take to reduce your risk:

Do more for your health. Schedule a Breast Ultrasound Screening that increases early detection in women with dense breasts from approximately 48% to 97%. HerScan is a mobile breast screening service, meaning we travel all over the country to hundreds of different cities to hold our health events. Click here to schedule an appointment in your city today.